Well this was a little more in depth than I had expected.

Our brief was to look over the carburettors as well as a few other jobs on this lovely 3.8 Jaguar which was a little down on power.

I have always been fond of the E Type, especially having realised that the marque was released on my actual birthday in March 1961. Patience for this job was not an issue as the HD8 mechanism and E Type beauty never ceased to be enjoyable. However, the clock over my shoulder was relentless!


Although I have worked on various Jaguar carburettors of the period, I had underestimated the amount of time it takes to overhaul a set with the additional third item, especially when it came to throttle shaft renewal and bush work. It also became very clear that corrosion has been an issue, the aluminium body having considerable white powder where dry and a dark witness of previous corrosion in the material beneath the fuel dampened areas. Much of the brass work had green verdigris along with more white powder in and around the jets and fittings.

Reflecting on this condition with Will Fiennes later in the week, remarks were raised regarding modern fuels, ethanol and "other"content. In fact, what Jacob and I had found was remarkably similar to the findings in my Methanol Weslake motorcycle engine on the weeks that I had neglected a pre storage carburettor clean. ... Something to think about?
Even the steel air bleed volume screws had lost their substantial tip to corrosion requiring the machining of one to become a lapping mandrel to recover the seats in preparation for three new.. plated.. items.

After lots of fettling time and attention to one carburettor that has had the throttle shaft bush locations bored all of the way through, removing the thin section of throttle body wall that the bush is designed to meet. This will allow complete throttle housing bore concentricity and avoid any risk of vacuum escape around the butterfly in this region.

During a routine check of the fuel filter in the King Price regulator / filter, we discovered the complete regulator check valve collected inside of the filter. The unit has been retained by a light press fit and "staking" at four points... I think the stake tool must have been a little blunt when factory assembled!

Finally all back together and tested before returning to the owner, his e.mail was a welcome find later that evening.

To summarise; Triple SU HD.8 overhaul is no "quick job", but well worth it. And keep ethanol and classics in mind..

> Best regards and thanks.

> PS bet you cannot make the camper go this fast " 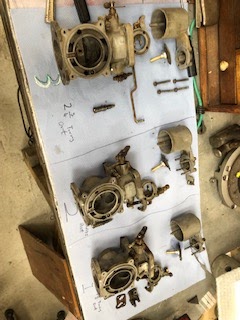 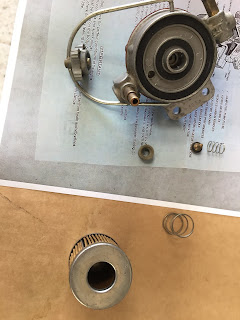 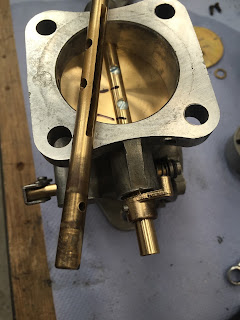 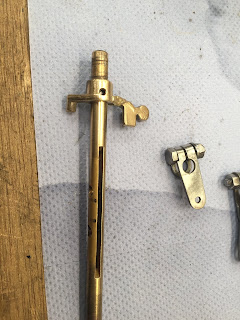 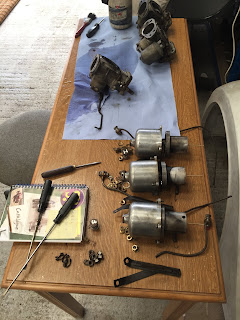 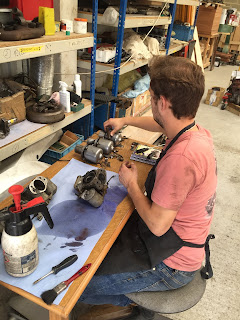 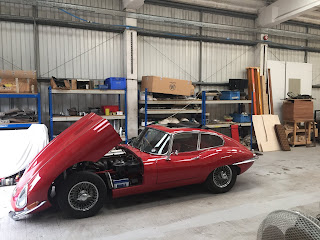