There is talk of a new, slightly themed Rock & Roll Cafe and club in Swanage. It sounds like it may evolve into a cool place to be, whether it is Rock and Roll, Punk or Rockabilly. Bits of American Icon and 50's and 60's rebellion! Watch this space! http://www.rockahulaclub.co.uk/
Posted by Eric at 16:11 No comments:

Email ThisBlogThis!Share to TwitterShare to FacebookShare to Pinterest
Labels: Rock A Hula Cafe

Some nice bikes on the Quay tonight.

On the way home, waiting for the floating bridge ferry.

I have recently dusted (unwrapped) off this project, an early Perkins P6 (1940's). 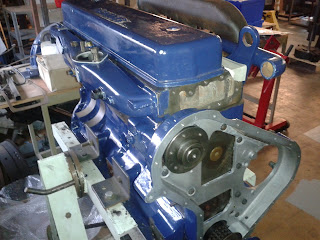 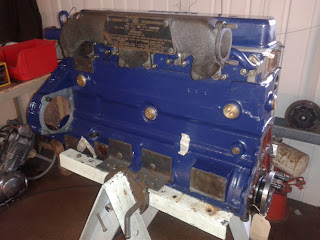 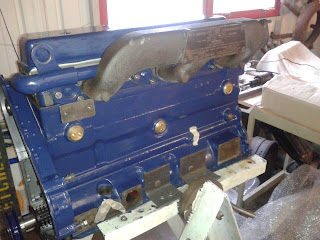 This engine build was started by me an embarrassingly long time ago, the owner uttering those fatal words over 5 years ago, "There is no hurry".
Posted by Eric at 14:07 No comments:

A friend passed this site address to me today http://www.teamthruxton.blogspot.com/ .  Do have a look.

Thank you Angus it looks really interesting, BTW Old Sarum Flying Club restaurant is the best place for coffee, food and especially cakes. Friendly to all!
Posted by Eric at 14:31 No comments:

This picture didn't really come out as I had hoped. If you click on it to enlarge you will see the horizon.

The tallship on the horizon is STS "Tenacious". She is the second tall ship in the bay over the last two days.

On my morning  break in the local outside cafe, whilst sipping at my morning coffee, I  realised that there is a tenuous link between the BMW and tall ships.

10 years ago I was entering in to a job that was to become an real burden. During that time my wife realised the effect it was having. Everything, almost, had taken second place to the relentless commitment to work that was all enveloping and oppressive.

So, with a huge thank you to my wife, I found myself stepping off a gang plank on to the square sailed "Phoenix" for a great adventure as a crew member, although only a four day trip, it was about to change my life.

Doing my best to look a "natural", ascending the ratlines to the fighting tops, gently coaxed by one of the many pretty young ladies of the full time crew, I 'm afraid I couldn't hide my real feelings as they giggled and pointed out "Elvis Leg" (the involuntary mad shaking of one leg with each step taken toward heady altitudes).
Soon I settled in to the carefree way of life on board, punctuated by reassuringly disciplined routines.
The eclectic mix of crew members including the girls on gap years, the older gentleman fulfilling a lifelong dream. The antipodean ex motorcycle drag racer and record breaker who now travels with the seasons and the sun from ship to ship. The Polish bosun, working his qualifying hours toward an officer position on an ocean going tanker. And, the mother of the ship, the ships cook, a rotund, tender, loving  and colourful lady, who settled and fed her family around a large wooden table below deck..

As I sat at the mast foot during a late evening watch, I contemplated the people that already seemed a family, I absorbed the relaxed lolling, creaking mood of this living wooden vessel and I made my decision!

Six weeks later I walked out and closed the door on the oppressive, life draining environment, leaving ruffled feathers but breathing the summers air, a new start.

Again I became my own person, again my interests returned, I was back working for myself and alive!.

Well time I finish this coffee and get back on the smile inducing cafe racer and back to my little workshop, how lucky I am.......... Tenacious and Phoenix, very apt!
Posted by Eric at 15:59 2 comments:

This little hut is in some very large woodland near my childhood home. I remember stumbling on it in amazement when I was very young. I guess its a 1930's hunting/ shooting party shelter.
It seems to have been made more accessible by the Wiltshire Wildlife Trust or somebody, I fear a bit for it's security now there are more visitors.

I've been fitting some modified gears to a W O Bentley steering box recently, giving me the long overdue opportunity to see an example of  W O Bentley engineering. Amongst all of the very nicely made items the following little piece really intrigued me:


The shaft of the steering column joins with the steering worm gear via a parallel key and two cotter bolts through an outer sliding sleeve. The column shaft is tubular with about an 1/8" wall thickness. The keyway is neatly machined through the column tube and corresponding worm shaft. This means the key is fitted after the shaft has engaged, then a split sleeve or collar slips over the key and the cotter bolts retain everything tightly. No stress raising keyways demanding over size hollow shafts, just very neat simple and innovative design.
Posted by Eric at 13:33 No comments: Thank you to Purbeck Footprints Blog http://purbeckfootprints.blogspot.com/
Posted by Eric at 14:39 No comments:

Fascinating collection of mechanisms on the bench, all pre.1930.

This could be any 1929 workshop. (except for Sprinter on the wall):

Email ThisBlogThis!Share to TwitterShare to FacebookShare to Pinterest
Labels: Mechanisms

This BMW is becoming one of the best bikes that I have ever owned.
I don't know why, but it just makes me smile to ride, to look at and to plan the next bit that I am going to add or make.
To disguise the original clocks and panel I have just finished making this aluminium dash.

Email ThisBlogThis!Share to TwitterShare to FacebookShare to Pinterest
Labels: Jodel

The above images have been collected from various sites over many years, to credit them is difficult, I am sorry if any party objects to their posting, I will remove immediately if required or would be happy to post due credits..
Posted by Eric at 11:20 1 comment: